Haley – A Girl Scout with Ambition

July 11, 2016 · by Girl Scouts of Eastern Massachusetts · in Girl Program · Leave a comment 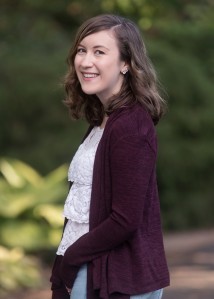 Haley joined Girl Scouts in first grade to spend time with friends who were already in the local troop. A few years later, however, she had to start school in a new town, and while she wasn’t thrilled about the move, she made her first new friends through Girl Scouts. Looking back, Haley says, “The Girl Scout Law says you must be a sister to every Girl Scout, which I have felt so personally. When I meet new friends at Girl Scout events, it’s not nearly as intimidating as meeting friends elsewhere.”

Through Girl Scouts, Haley developed long-lasting memories, one of which was a trip to a horse ranch in upstate New York with her troop in fifth grade—a trip they funded with cookie money.

Later, as a sophomore in high school, she had the opportunity to attend the Massachusetts Conference for Women, where she heard her longtime role model Hillary Clinton speak about the issues facing women today. Haley was so inspired by the experience that she made the decision to pursue a career in political communication. 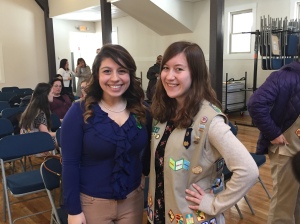 Haley is also the head of communications of the GSEM Leadership Committee. She writes blog posts, generates newsletters and creates flyers to recruit new members and publicize the group’s efforts. Read an interview with the Leadership Committee to learn more about their work!

Also high on Haley’s list of memorable Girl Scout experiences was being selected to introduce Hannah Grove, chief marketing officer for State Street Corporation, at the 2016 Leading Women Awards. In preparation, Hannah took Haley to lunch where they discussed communications, specifically honesty and responsibility in the workforce. They found that they had a lot in common and have kept in touch ever since. 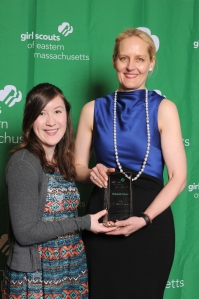 After two years of significant effort, Haley earned the Gold Award this past April. Her project, Only in Maynard, addressed her community’s lack of historic preservation resources. Working with the Maynard Historical Commission, Haley wrote a 55-page historic preservation handbook and created a series of historic scavenger hunts which ran as part of the two-day First Annual Founder’s Day event, which she helped to organize. The event will continue to run each year as a celebration of town history.

Next fall Haley will be attending Boston University’s College of Communication, double-majoring in communications studies and political science, with the ultimate goal of working in lobbyism.

We are so proud of Haley’s achievements and the way she shines bright as a leader!