I am honored to be running for Team Girl Scouts! I became a Girl Scout in third grade, and continued through my high school graduation. Girl Scouts was an incredibly formative part of my childhood and teenage years. For example, I remember learning how to brainstorm during Girl Scout meetings. Our troop leader allowed us to throw out the most outlandish ideas for our camping dinners, and nobody was allowed to criticize. Then, it became time to move from brainstorming to decision-making. We discussed whether we wanted to buy those steaks (a real suggestion!), and what that cost meant in relation to our Girl Scout Cookie orders. To this day, my personal budgeting is done this way; everything is considered in terms of “work hours.” 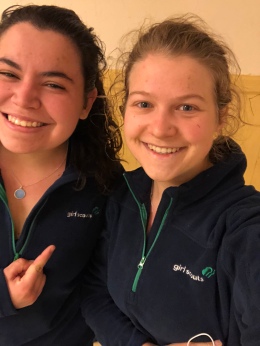 Marcia and Brittany, a fellow 2018 Team Girl Scouts runner, after a practice run

My favorite part about being a Girl Scout was working on my Silver and Gold Award projects. Both took me out of my comfort zone—I had to write entire scripts in Spanish as part of my Gold Award project!—and taught me that I had capabilities I never knew. Because so many girls in my troop were pursuing the Gold Award, our meetings were a collaborative, supportive environment where we helped each other, and, sometimes, we just took the opportunity to relax and laugh together! While our projects were undertaken alone, we felt that we earned our awards together.

I credit Girl Scouts with much of my personal development. It just seems right that I’ll be running for Team Girl Scouts—if I’m going to challenge myself, there’s no better community to have in my corner than Girl Scouts.

This will be the first time I run a full marathon. I have run many half-marathons before… 15, to be exact! I am anxious and excited and terrified of this new goal I’ve set, but above all, I am a risk-taker, and I am honored to be running for Team Girl Scouts. On race day, I will be a mess of nerves, but beaming because I will be running to support an organization that has contributed so much to my personal growth.

We are honored to have Marcia on Team Girl Scouts this year! There are just a couple more months until the Boston Marathon… help Marcia reach her goal and support healthy programming for girls!

← Find Cookies Near You This Weekend!
Going for Gold: Pollinator Garden in Davis Hayfield →